In another recusal controversy involving the West Virginia Supreme Court and the natural gas industry, a newly appointed justice declined to step aside from hearing a case on Tuesday, despite the fact that he was personally represented by a lawyer now representing a company involved in the proceeding.

Former U.S. Rep. Evan Jenkins hired Huntington lawyer Ancil Ramey, a former court clerk who often appears before the justices, to appear on his behalf last month when two lawyers tried to block Jenkins’ appointment to the court by arguing that he didn’t meet state constitutional requirements for the post.

Ramey won that case, and Jenkins was sworn in on Oct. 1.

Tuesday was the first day Jenkins was scheduled to hear oral arguments, and the second case on the docket was a major lawsuit filed by a group of Harrison County residents against Antero, West Virginia’s largest natural gas producer, alleging that the company is making life in their community unbearable.

On Tuesday, Jenkins turned down a motion filed by the residents asking him to disqualify himself from the Antero case because of Ramey’s involvement in ensuring Jenkins got his seat on the Supreme Court.

In a one-page memo made public just before court was to begin for the day, Jenkins said he “had no prior relationship” with Ramey, “the representation was brief, and it has terminated.”

The court has faced several recusal controversies in recent years.

Just weeks after taking office in 2017, Justice Beth Walker voted to rehear and then to overturn a previous ruling over how lease payments from gas producers to gas owners are calculated. Walker denied a motion to disqualify herself based on her husband’s stock holdings in energy industry companies. She said her husband had sold the shares before the case was argued.

Years earlier, then-Justice Brent Benjamin refused to recuse himself from hearing an appeal involving Massey Energy Co., even though its CEO at the time, Don Blankenship, had spent $3 million on a campaign against Benjamin’s opponent in the 2004 election. That case went all the way to the U.S. Supreme Court, which ruled in June 2009 that Benjamin should have stepped aside. Walker defeated Benjamin in the 2016 election.

The Jenkins controversy also comes as West Virginia’s Supreme Court faces a continuing crisis over spending — including allegedly using state cars for private trips and lavish office renovations that included a $32,000 couch — that has touched all five justices. 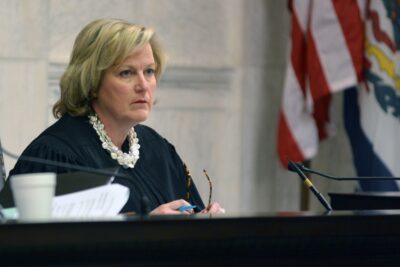 One justice, currently suspended, is on trial in federal court, contesting criminal charges that include fraud and obstruction; another justice resigned and then pleaded guilty to wire fraud; and a third retired after being impeached, but alleged the House GOP leadership was trying to take over another branch of government. A fourth was publicly reprimanded by the state Senate after an impeachment trial, but denied wrongdoing and avoided the more serious punishment of removal from office. The fifth faces an impeachment trial this fall, and has vowed to fight removal from office.

Jenkins was appointed to fill the seat of Robin Davis, the justice who retired after being impeached.

“Justice Jenkins presiding over a case wherein his attorney is representing the respondents Antero raises reasonable questions about impartiality and has an appearance of impropriety which requires Justice Jenkins disqualify himself from this matter,” said the motion from Anthony Majestro, lawyer for the residents.

In a response filing on behalf of Antero, Ramey said that disqualification of Jenkins was not necessary, because Ramey’s representation of him had ended before Jenkins officially joined the court. The response also said that while Ramey helped write Antero’s briefs in the natural gas case, he was not the lead lawyer and would not be taking part in the oral arguments.

In the case, residents in the Cherry Camp area of Harrison County are appealing a lower court decision that threw out their lawsuit against Antero. The residents sued over a variety of natural gas production activities they argue create a nuisance, including unbearable traffic, “constant dust” that hangs in the air and settles on homes and vehicles, disruptive heavy equipment noise, and bright lights that shine into their homes day and night.

Antero attorneys say the company has only done what was reasonably necessary under its leases to extract gas, and that those operations don’t interfere with the residents’ use of their property. Antero lawyers said a panel of lower court judges was right when it threw out the case.

Hundreds of similar cases are pending in West Virginia courts, and the eventual ruling in the matter before the Supreme Court will likely set a precedent.

The issues raised in the cases are of growing concern in West Virginia, as the state’s natural gas industry continues to boom.

While Jenkins didn’t recuse himself, another new justice, Tim Armstead, did. It was not clear why Armstead recused himself from the Antero case, although, previously, Armstead, a former state House of Delegates speaker, worked as an attorney for a different natural gas company. Armstead was appointed to the court by Gov. Jim Justice at the same time as the governor appointed Jenkins.

No party filed a motion asking Armstead to disqualify himself, a court spokeswoman said. Armstead offered no explanation in a one-sentence memo to the court clerk.

His disqualification came just moments before the case was to be argued, so there was no time to find a replacement judge, a process that is allowed in West Virginia on a case-by-case basis. The residents asked that the argument be rescheduled for a later date, and the court agreed.

The seats held by Jenkins and Armstead are on the ballot in West Virginia’s general election next month. Both men are running.