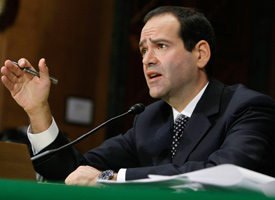 What are all those banks doing with all that taxpayer money? Well, at least with one bank, we'll have an answer.

On New Year's Eve, the Treasury Department and Citigroup signed an agreement for the government to purchase $20 billion worth of preferred stock in the company. Although it was nearly the 200th time the Treasury Department had executed such an agreement, it was the first time that the government required that the financial institution regularly account for what it's doing with taxpayer money.

Citigroup will use its "reasonable best efforts" to account for the money and issue quarterly reports to the government, according to the agreement. The provision came as a result of prodding from Neil Barofsky, the Special Inspector General for the $700 billion Troubled Asset Relief Program, he said in a letter (PDF) Wednesday to the Senate Financial Services Committee.

Until recently, Treasury officials had resisted calls from Congress and watchdogs to track how the bailout money is being used. But it doesn't appear that they've really had a change of heart. Treasury Department spokeswoman Brookly McLaughlin said the agreement was unique.

And sure enough, the same day that the Treasury Department invested $20 billion in Citigroup, it invested more than $13 billion in seven other financial institutions. Those agreements did not contain a clause requiring the companies to track the money. (You can see our list of all the companies here.)

Barofsky writes that he made the suggestion in a letter to Treasury officials on Dec. 23. He also says he requested adding language ensuring that he and his staff have access to the books and personnel of companies that receive TARP money, a provision that appears in the agreements with General Motors, Chrysler, GMAC and Citigroup -- but not in the agreements with the other institutions, which occurred on the same day, Dec. 31.

The reason for that discrepancy appears to be the Treasury Department's reluctance to impose a burden on institutions it deems healthy.

The Treasury Department has used most of the bailout money so far to boost the financial system by investing in banks of all sizes throughout the U.S., a program dubbed the Capital Purchase Program. All but five of its investments and loans have been under that program: AIG, Citigroup, General Motors, Chrysler, and GMAC are the exceptions.

The Treasury has coined new program titles for those. For instance, there's the Automotive Industry Financing Program for GM, Chrysler and GMAC.

AIG got its $40 billion of TARP money under the Systemically Significant Failing Institutions program. And Citigroup, which was spiraling downward in November before the government stepped in to provide $20 billion and help absorb losses on toxic asset-backed securities, is the sole institution under the Targeted Investment Program, designed to prevent "the loss of confidence in a major financial institution." (PDF) In other words, the Treasury Department has the whole spectrum covered: the Capital Purchase Program is for healthy institutions, the Targeted Investment Program is for large financial companies in danger of failing, and there's a different program for the ones that fail like AIG.

Treasury officials have resisted tracking how banks in the Capital Purchase Program use the money, preferring instead to rely on general metrics on the health of the financial system. They've also rebuffed requests to prevent the participating banks from paying dividends to shareholders or tighten restrictions on executive pay. "When we have a healthy bank program and we want thousands of banks to participate, we want to make it attractive for them to volunteer to participate in the program, not to scare them off," Treasury Department official Neel Kashkari testified last month.

Citigroup, however, is the only institution to participate in both programs. In October, it was among the eight banks to accept the first round of TARP investments. But that $25 billion was under the Capital Purchase Program, and that agreement does not require Citigroup to track the money. So the bank is actually only required to track less than half of the $45 billion total invested by the government so far.

After criticism from lawmakers and the Government Accountability Office of its failure to track the money, Kashkari said last month that the Treasury Department was "working with regulators" on a solution. Federal bank regulators have access to private financial info, and the GAO has recommended using that access to determine how the money is being used. But Kashkari cautioned against expecting too much: "It's not going to be perfect. And as you know, you put $1 into an institution, it's impossible to follow where that $1 goes."