This month, Congress passed an $8.3 billion emergency bill to respond to the coronavirus crisis. The money goes toward developing vaccines, disease surveillance, disaster loans and much more. But none of it goes directly to first responders for the protective gear and supplies they need to safely combat the novel coronavirus.

Last week, ProPublica reported that firefighters, paramedics and emergency medical technicians on the front lines are desperate for such equipment. Some EMTs are begging for masks at local hospitals. Others are rationing gowns and face shields.

The Coronavirus Preparedness and Response Supplemental Appropriations Act, which became law March 6, only invests $10 million for “training” of first responders, money they will have to share with hospital employees and other health care workers.

“I think we know how to put our protective gear on,” said Gary Ludwig, chief of the Champaign Fire Department in Illinois, calling that part of the bill “ridiculous.”

“They don’t need to teach us that,” said Ludwig, who is also president of the International Association of Fire Chiefs. “We need more stuff, is what we need.”

Haydon Pitchford, an EMT in Central Virginia, has been searching for the N-95 masks that are recommended to protect against the novel coronavirus. He called the money a “paltry sum” devoted to the wrong purpose. “One would assume we’d need protective equipment for that training to be useful,” he said.

Henry Connelly, a spokesman for House Speaker Nancy Pelosi, D-Calif., said in a statement that, “more coronavirus response funding legislation is coming.” Lawmakers are working to ensure first responders have the equipment and resources they need to stay safe, Connelly said.

Doug Stern, spokesman for the International Association of Fire Fighters, acknowledged that some money from the bill could trickle down to first responders, but they would have to fight for it. Most will go to hospitals and other health care workers, which is obviously important, but it’s not likely to help serve the immediate needs of his members, he said. Stern said his members also report getting left out of the distribution of additional protective gear that may come from emergency stockpiles. 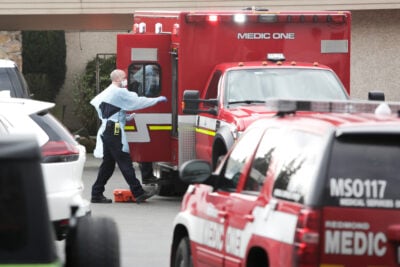 “We are hearing of possible shortages on the West Coast and all around the country,” Stern said. “If firefighters and paramedics don’t have the equipment they need, it’s a risk to them and the general public. It contributes to community spread ... and depletes staffing levels.”

Fire departments are often thin on staff, so Stern said they also need federal funds to help cover overtime pay and to hire extra workers. The firefighters association sent letters to lawmakers Tuesday advocating for funding and urging Congress to prioritize them for testing and vaccines should they become available. “Our members are often the first workers in physical contact with infected persons,” the letter said.

Front-line emergency responders said they often feel overlooked in such legislation because policymakers don’t always recognize them as health care workers, even though they respond to medical calls. “We get forgotten a lot,” Ludwig said.

Since ProPublica’s story on Friday, we have heard from more emergency medical workers who are worried about the lack of personal protective equipment — first responders from Washington to Massachusetts to Alabama. One, who works in a private ambulance, was given one mask to last two weeks. Their worries extend beyond themselves. “I am also afraid of being asymptomatic,” wrote one, “and unintentionally infecting other patients.”