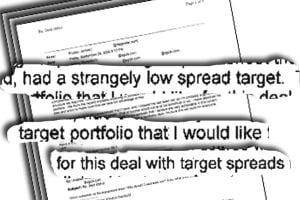 By the fall of 2006, housing prices had already peaked and Magnetar's assembly line started producing, helping to create CDOs it would bet against. The hedge fund's appetite seemed insatiable. The deals were the talk of CDO desks across Wall Street.

Between the end of September and the middle of December 2006, Magnetar had a hand in spawning at least 15 CDOs, worth an estimated $23 billion. Among the banks involved with those deals were Citigroup, Lehman Brothers and Merrill Lynch.

E-mails obtained by ProPublica from that time suggest Magnetar's clout. The firm was involved at the start of deals and pushed for riskier bonds to be included.

After Magnetar expressed interest in buying the equity, the French bank Société Générale began to build the CDO, and selected a New York-based manager, Ischus Capital Management, which would choose the exact bonds to go into the CDO.

Magnetar wanted to name the CDO after a small constellation in the southern sky called Hydrus, which means "male water snake." But by late September, Magnetar and Ischus began sparring over the composition of the deal.

Magnetar pressed Ischus to buy lower-quality assets for the deal, according to three people familiar with Hydrus. In an e-mail to bankers at Société Générale and Ischus executives, Magnetar's CDO specialist, Jim Prusko, wrote on Sept. 29, 2006, "The original portfolio target spreadsheet that I have... had a strangely low spread target. That of course would not at all be beneficial to us. I have attached the target portfolio that I would like for this deal with target spreads."

The portfolio Magnetar outlined didn't list specific bonds, but executives at the CDO manager Ischus felt that they understood what Prusko wanted. A request for higher-spreading assets means more risk in the deal.

Andrew Shook, an Ischus executive, answered forcefully on Oct. 3, "We will not assemble a portfolio we are not proud of and feel strongly about in the name of a spread target."

Prusko dialed down the pressure, responding within an hour. "Of course, the actual security selection is totally your purview," he wrote. "I just wanted to make sure the overall portfolio characteristics worked for our strategy."

Shook declined to comment on the e-mail exchange. Magnetar says that the deal as originally conceived wouldn't have been profitable and that it was merely trying to get a higher return -- a higher "spread" -- to balance out the risk it was taking in owning the bottom-rated slice of the CDO.

The two sides subsequently drifted apart, partly over Ischus's unease with Magnetar's pressure, and the deal was never completed.