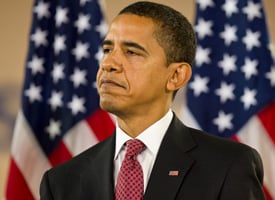 Yesterday we reported on the White House's approval of a regulation that would allow health care workers at federally-funded institutions to deny treatment they find morally objectionable. It's commonly known as the "provider conscience" rule, and if finalized this week will go into effect before the end of the Bush administration.

But the Obama transition team has been busy considering the options for how to reverse this rule, as well as other reproductive-health regulations, the Wall Street Journal reported today. (The team is also eyeing many of the Bush-era environmental and climate change policies.)

The rule, approved by the Office for Management and Budget on Dec. 15, expands the coverage to include virtually anyone who works in a hospital that receives federal funds, and protects them from discrimination should they refuse to give an abortion or provide information on birth control and other forms of reproductive-health care they find offensive.

The new rule pitches a bigger tent over the types of workers and volunteers who can stage a proverbial moral sit-in. While workers directly involved in procedures used to get special protections, now they would extend to anyone from a scheduler arranging for abortion counseling to a janitor cleaning an operating room.

If finalized, the impact could be expansive. The Department of Health and Human Services approximates 584,000 hospitals, pharmacies and other health care providers would be affected, the Journal reports.

The Journal says Obama is considering removing health care coverage for fetuses under the Children's Health Insurance Program and restrictions on federal funding for embryonic stem cell research. It also seems likely we will see a shift in funding from sexual abstinence programs to those that also include discussion on birth control options, the Journal reports.

As we've noted before, it won't be easy for Obama to overturn Bush's last minute regs. His options range from congressional intervention to re-starting the (very long) rulemaking process.

As for the fate of the "provider conscience" rule? The Journal, citing "officials close to the transition," reports that the team may choose to brave the oh-so arduous rulemaking process.

You can read more about this rule and the others we have been tracking on our Midnight Regulations chart.