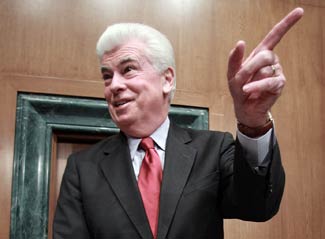 We’ve decided to restart the ProPublica promise clock on Sen. Christopher Dodd’s months-long commitment to share details of his mortgage. The Connecticut-based Democrat, chairman of the Senate banking committee, has been catching flak ever since news reports alleged that he got a sweetheart mortgage from industry giant Countrywide last summer.

Last Monday, Dodd let a dozen or so reporters look over the loan documents in his Hartford office. Dodd also released to the public a third-party report prepared by a Chicago-based firm that Dodd hired (through his lawyers).

Promise fulfilled? Not so fast. Only a handful of reporters were invited to view Dodd’s documents. They were not told the documents would be available until the last minute. Reporters weren’t allowed to leave with the papers or make copies. And, even though Dodd (and his self-published report) claim he’s got nothing to hide, his office has dodged our phone calls asking to view the documents.

The Hartford Courant’s editorial page also seems less than satisfied by Dodd’s limited disclosures. After calling Dodd’s Feb. 2 press conference his "most detailed defense of the loans" since the story broke last summer in a news article, a Feb. 7 editorial in the same paper called the event "a disappointing performance."

He doesn't admit that accepting the loans was an error in judgment. Instead, he seems to be apologizing for political miscalculations…

Countrywide had a powerful incentive for trying to sway senators from a harsh view of its lending practices. And while Mr. Dodd apparently assumed he wasn't getting special treatment as a customer of Countrywide, he didn't ask the right questions, either.

We’ve now rung Dodd’s office more than a dozen times since last Monday to ask either to see the documents or for an explanation of why they are being kept out of public view.

"I think we answered that question in our statement," said Bryan DeAngelis, a spokesman for Dodd, who was finally reached on Friday. "Do you have any other questions?"