Geoff Burr spent much of the last decade as the chief lobbyist for a powerful construction industry trade group. Burr sought toinfluence a host of regulations of the Department of Labor, opposing wage standards for federal construction contracts and working against an effort to limit workers’ exposure to dangerous silica dust.

In the Obama administration, someone like Burr would have been barred by ethics rules from taking a job at an agency that he had lobbied.

In the Trump administration, Burr now has a top job at the Labor Department.

Burr is the first publicly known example of a former lobbyist who was able to take a job in the government as a result of President Donald Trump’s watering down of ethics rules in place during the Obama administration.

As a candidate, Trump regularly railed against lobbyists and led crowds in chants of “Drain the swamp!” But as president, Trump last month signed an executive order that weakened significant aspects of the Obama ethics policy, including scrapping a ban on lobbyists joining agencies they had recently lobbied.

Ethics experts say Burr’s hiring is a troubling example of how the new administration has greased the revolving door.

“A lobbyist like Burr may de-register on Monday and enter the Trump Administration on Tuesday,” said Craig Holman of the watchdog group Public Citizen. “The very same agency Burr has been lobbying as a hired gun is now Burr’s to help run. This is a grave problem for the public because the agency may well represent the special interest rather than the public interest.”

It also raises questions about ambiguous language in the Trump executive order.

Instead of banning lobbyists from working at agencies they lobbied, the Trump pledge, which has to be signed by all executive appointees, imposes restrictions on what such officials can work on. Specifically it says they cannot “participate in any particular matter on which I lobbied … or participate in the specific issue area in which that particular matter falls.”

Ethics lawyers are now puzzling over what exactly that language means.

That task is made more confusing because of an apparent error in the Trump executive order: It says the phrase “particular matter” has the “same meaning as set forth in section 207 of title 28, United States Code.”

That part of the U.S. code does not exist.

There is a definition for that term in section 207 of title 18. (The error is doubly strange because much of the Trump executive order was copied word for word from an earlier Obama order. The White House didn’t respond to a request for comment.)

While it was cited incorrectly, the phrase “particular matter” does have a clear legal meaning, which has been detailed by the Office of Government Ethics.

Another phrase in the Trump order, “specific issue area,” was also used in the Obama order but its meaning is unclear.

“It is not defined in the Trump pledge. There’s uncertainty within the government and outside the government about what that particular term means,” said Robert Walker, an ethics lawyer at Wiley Rein in Washington. “The same lack of clarity was a problem with the Obama pledge in this area."

Because the Obama pledge included a blanket ban on lobbyists joining agencies they recently lobbied, the ambiguity of the restrictions on what lobbyists could do was less urgent.

Because Trump weakened the Obama rules, he won’t have to issue waivers in such situations. But if Trump issues a waiver allowing, say, a former lobbyist to work directly on issues that he lobbied on, we may not even find out about it: The executive order removed the mechanism for public disclosure of such waivers. 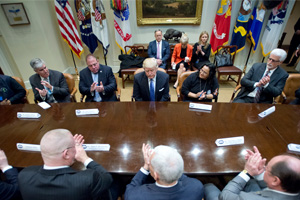 The president has cultivated a relationship with the building trades unions. But early hires at the Department of Labor are opponents of wage standards for construction contracts. Read the story.

In the case of a former lobbyist like Burr, who worked at the Associated Builders and Contractors, there was a consultation with a Labor Department ethics lawyer. “If recusals were deemed to be necessary, it’s likely that there would be some documentation of the contours of those recusals,” Walker said.

Department of Labor spokeswoman Jillian Rogers declined to detail how Burr will comply with the ethics order. She offered the following statement:

“Mr. Burr has signed the Ethics Pledge and received a full ethics briefing on his first full day at the Department. He has been in frequent consultation with the DOL Ethics officer to ensure he is fully compliant with all ethical obligations in his role at the Department.”

Enforcement of the Trump’s ethics rules will also be at the discretion of the administration, as it was with the Obama order.

Whether Burr’s work at the Labor Department will be significantly limited by the president’s ethics rules depends on how the administration interprets the order.

Burr is now a member of the so-called beachhead team at the agency and is reportedly in line to be chief of staff to Labor Secretary nominee Andrew Puzder.

That role is shaped by each labor secretary’s needs, according to Seema Nanda, who was chief of staff through January 20 of this year.

Under Obama Labor Secretary Tom Perez “anything significant that is happening in the department or anything that is a change in policy you are discussing as chief of staff,” Nanda told ProPublica.

That includes reviewing documents that need the secretary’s signature, such as new regulations, reports to Congress, or letters.

The chief of staff and his or her deputies “regularly meet with the agency heads to see what they’re thinking about. You are really going over in depth what each agency is working on."

UnitedHealthcare Tried to Deny Coverage to a Chronically Ill Patient. He Fought Back, Exposing the Insurer’s Inner Workings.