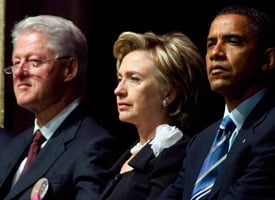 In response to a deal with the Obama transition team, the foundation publicly posted its list of contributors today, drawing enough traffic to crash its fragile server. (The Wall Street Journal has put up its own list of the major donors.) Those who were able to access the list found an impressive roster of foreign governments likely to be interested in getting a word in with Hillary Clinton, future secretary of state.

The Washington Postpoints out that the governments of Saudi Arabia (more than $10 million), Norway ($5 million to $10 million), Kuwait, Qatar, Brunei, Oman ($1 million to $5 million apiece), Italy and Jamaica ($50,000 to $100,000 apiece) all ponied up. So did billionaires and business interest groups from Israel, China, India and Ethiopia, the former deputy prime minister of Lebanon, the son-in-law of the former prime minister of Ukraine and many, many more.

The Blackwater Training Center threw in $10,000 to $25,000. The Post notes that military contractor Blackwater's controversial deal with the State Department is up for renewal next year.

But while the list may look comprehensive, it doesn’t include everyone with connections to the Clinton Foundation.

Others on the list show up lower than they might if all their contributions to the Clintons' various initiatives were tallied. Vinod Gupta, a businessman, has spent several million keeping Bill Clinton on his payroll as a consultant and donating to his various charitable events, according to National Public Radio. But the Clinton Foundation only lists his contributions as $500,000 to $1 million.

(Also, Wall Street scamster and bad guy du jour Bernard Madoff hasn't shown up. But shaky access to the foundation's Web site means we haven't been able to do a full search yet. Madoff was big on charity and was a contributor to Hillary's political campaigns.)

As part of his deal with the Obama administration, Bill Clinton has promised to scale back his international fundraising activities. But Politico notes that there are plenty of loopholes.

Correction, Dec. 18, 2008: This article originally stated that Clinton had not yet identified donors to the Clinton Presidential Library. In fact, Clinton Foundation funded the library, and its donors are represented in the list made public Dec. 18.