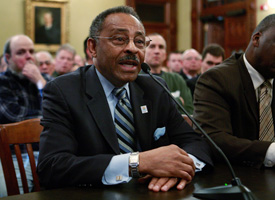 Politicians and the media largely have portrayed Sen. Roland Burris as an upstanding public official. As Barack Obama described his replacement in the Senate, Burris is a "good man and a fine public servant."

But Burris' record as state attorney general contradicts this squeaky clean image. It shows Burris to be more like a stereotypical Illinois politician: He steered state business to friends, gave state jobs to family and later, as a private lobbyist, benefited from his political ties.

"They're not necessarily the most egregious actions, but it's very indicative of a way of doing politics that's been the norm for a long time in Illinois," said Cindi Canary, executive director of the Illinois Campaign for Political Reform.

Republicans grilled Burris on his tenure as attorney general -- lasting from 1991 to 1995 -- a sort of golden age for Burris' supporters.

During Burris' first full fiscal year as attorney general, his office outsourced more than $2 million in state legal work to firms that contributed to his campaign and the state Democratic fundraising committee, according to "Illinois for Sale," a 1997 book published by Illinois Issues magazine and the Springfield State Journal-Register. These contracts accounted for more than half the amount his office awarded for outside legal work that year.

While state comptroller, Burris moonlighted at Jones Ware & Grenard, a Chicago law firm. The firm gave Burris a $100,725 buyout when he became attorney general in 1991. Over the next few years, Burris' office steered about $436,000 in state business to the firm.

At the time, Burris said there was "absolutely no link" between the buyout and the firm's subsequent state business.

But because Burris did not publicly announce the work, other, potentially less expensive firms could not compete for the award.

Despite taking heat for allegedly favoring his supporters, in Burris' final year as attorney general he hired his nephew, Steven R. Burris, as a staff assistant.

As we reported yesterday, even before there was a Senate seat for Burris to covet, he and Blagojevich were partners in politics. Burris has donated more than $20,000 to Blagojevich, worked on his campaign and in 2006 held a 3,000-person fundraiser for the governor, who had already been under federal investigation for two years.

Once Burris became a state lobbyist, Blagojevich's administration reciprocated with state business to his firm and its clients.

His lobbying firm received about $295,000 in state contracts from the Department of Transportation during Blagojevich's two terms, according to state comptroller records.

And in 2003, the Blagojevich administration awarded $753,800 in pension bond business to Loop Capital Markets, a Chicago investment bank and a Burris client.

We called Burris for comment but have yet to hear back.

Accusations of pay to play and nepotism aren't the only controversies Burris has faced in public life.

Burris' most notorious act came as attorney general, when he decided to aggressively pursue the death penalty for Rolando Cruz, a man wrongfully convicted of raping and murdering a 10-year-old girl. Burris ignored another man's confession to the crime and pleas from his own assistant attorney general to drop the case.

Mary Brigid Kinney, the assistant attorney general who objected to prosecuting Cruz, told ProPublica that Burris "wasn't going to do anything to seem soft on crime. He didn't have the guts," she said.

As Burris became Illinois' newest senator yesterday, Kinney reflected, "I think that we can certainly do better than this."