A director and alumnus of America’s wealthiest boarding school claims he had to sue the institution to see how it spends the funding it receives from sales of Hershey bars and Reese’s Pieces. 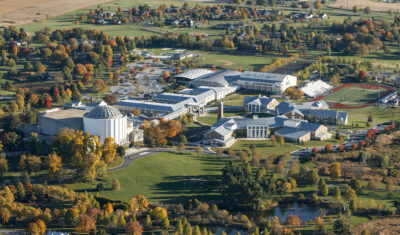 This article was produced in partnership with Spotlight PA and The Philadelphia Inquirer, which is a member of the ProPublica Local Reporting Network.

For over a year, lawyer Bob Heist, then-chairman of the Milton Hershey School’s board, says he sought internal financial records detailing the spending history of the $17 billion charity, which has a mission to educate low-income students for free.

He now says he is being denied records he needs as a board member charged with overseeing the Pennsylvania boarding school’s operations, and earlier this month he sued the school to obtain the documents. It’s an extremely unusual step for a sitting board member, taken against an extremely unusual institution: The Milton Hershey School is the wealthiest pre-college educational institution in the United States. It controls 80% of the Hershey Co. candy giant’s voting shares, and reaps profits from the sale of Hershey chocolate bars, Reese’s peanut butter cups and SkinnyPop-brand snacks sold in thousand of U.S. retail stores.

The dispute is the latest in a series of legal entanglements involving the nonprofit Milton Hershey School and the members of its governing board. Two previous financial controversies raised questions about whether the school’s spending was serving the needs of its roughly 2,100 students, as required by law and enforced by the state attorney general’s office.

The suit also raises anew questions about board oversight of the vast Milton Hershey fortune, donated by the candy company’s founder to help poor and at-risk children. For months, The Inquirer, Spotlight PA and ProPublica have investigated this and other issues, including whether school leaders and board members have fulfilled that mission to a degree commensurate with the charity’s vast resources. The publications will share their findings in upcoming stories.

For years, critics have argued that the school, and the endowment that funds it, could be spending hundreds of millions more than it does. Because of Milton Hershey’s restrictive deed on the endowment, the charity cannot dip into any of its principal, now worth $16 billion. (That’s roughly the size of the endowment of the University of Pennsylvania, which is not subject to those constraints.) It can spend the income earned from those holdings, but it only spends part of that each year and has amassed about $1 billion in unspent income. The school recently received court approval to use some of those funds to build and run six preschool centers around the state that, in five years, will serve 900 impoverished children, a potentially significant expansion of its mission.

By far the nation’s richest private school, Milton Hershey currently spends about $139,000 per child each year in total costs. The residential school vigorously screens its applicants, and it offers rigorous academics as well as medical, dental and social services to students, many of whose families are below the federal poverty line.

A spokesperson for the school, Lisa Scullin, said in a statement that it has provided Heist with “extensive financial information and will continue to respond to any reasonable requests in his capacity as a board member.”

Heist said in the suit that the financial information provided didn’t include everything he was asking for and contained inconsistencies. Ricardo Meza, Heist’s lawyer and a former federal prosecutor in the Chicago area, said, “We are going to let the complaint speak for itself.”

Heist, who lives in Chicago and is a Hershey graduate himself, said he needed the records to ensure that school funds were not being “wasted,” to find out whether the school reported accurate information to the IRS, and to determine if consultants “exerted undue influence in order to receive funds.”

A spokesperson for Pennsylvania Attorney General Josh Shapiro, when asked whether the office plans to look into the issues raised by Heist, said the office had been “made aware of the petition and will monitor it, as we do with all legal filings against charitable entities across the Commonwealth.”

Because the nonprofit school doesn’t rely on public donations or accept funds from federal and state agencies, it operates with little public oversight. And as a charity, it pays no federal or state income taxes. In exchange for the tax breaks, Milton Hershey School is required by law to serve the public good by fulfilling its charitable mission — lifting low-income children out of poverty — a responsibility overseen by the state attorney general’s office and its charitable trust section.

If the attorney general’s office learns of practices or decisions that appear to harm the interests of Hershey students or waste trust assets, its staff can investigate and seek reform. It has done so at least twice in the past decade when disputes such as Heist’s have erupted among board members overseeing the school.

Such was the case in 2010, when The Inquirer revealed that Milton Hershey School purchased a money-losing golf course for $12 million, more than double what it was worth according to the school’s own appraisal. The deal quietly tossed a financial lifeline to local investors, including Richard H. Lenny, chief executive officer of the Hershey Co. at the time and a member of the board that approved the purchase. After acquiring the private course, board members spent an additional $5 million to build a Scottish-themed clubhouse, with a restaurant and bar, and opened it to the public.

Then-Attorney General Tom Corbett, a Republican who later became governor, immediately began an investigation into the potential conflicts of interest and possible waste of charitable assets with the purchase of the foundering golf course.

Additional fuel was added to that investigation in February 2011, when Robert Reese, a board member and the president of the Hershey Trust Co., sued the charity and fellow board members. He alleged they were violating their fiduciary duties to wisely spend the charity’s assets to benefit poor children. As part of his 20-page suit, Reese claimed that there was “no financial analysis done by the trustees and its officers to support the $12 million price” for the golf course and that compensation for Hershey board members had tripled since 2002 — from $35,000 for a year of service to between $100,000 and $130,000.

The state-chartered Hershey Trust Co., a for-profit community bank founded by Milton Hershey, exists primarily to manage the billions of dollars in the Milton Hershey School’s endowment. It has no retail banking products, and its directors, who are paid at least $112,000 a year, are the same individuals as the school’s board.

Reese, grandson of the inventor of Reese’s Peanut Butter Cups, later dropped his lawsuit, saying his deteriorating eyesight made it impossible for him to carry it on. The charity denied his claims.

Shortly after the settlement, the school announced that it would use the golf course for new student housing.

In 2016, the Pennsylvania Office of Attorney General opened a new investigation into the charity’s board for apparently violating the 2013 agreement, along with lavish travel, board infighting and new allegations of conflicts of interest.

A leak of internal reports and travel expenses detailed the board’s behavior. In July 2016, the charity entered another settlement with the state attorney general’s office. The charity agreed to reconstitute its board, with several board members retiring and others limited to serving for a maximum of 10 years, and the attorney general gained the power to approve new board members, in hopes of ushering in a new period of good governance. The charity’s chairperson said she was “satisfied with the outcome.”

Heist’s petition is highly unusual, experts said, because directors of a charity typically have access to financial documents.

“A director of a nonprofit corporation in Pennsylvania is fundamentally allowed to see the books and records of the organization to determine whether the funds are being spent properly,” said Don Kramer, chairman of the nonprofit practice at Philadelphia law firm Montgomery McCracken.

Heist, who specializes in commercial law and litigation, would seem an unusual legal adversary for the institution.

He took the recent legal action “reluctantly and only after numerous unsuccessful efforts” to obtain spending details from school officials, according to the April 2 filing. Heist has been trying to access this information since September 2019, the petition says, including issuing no fewer than five requests this year alone to the current board chair, M. Diane Koken, a former Pennsylvania insurance commissioner.

Reached by phone, Koken declined to comment, referring a reporter to Scullin, the school’s spokesperson.

Heist said in the suit that he needs them to assess whether “substantial and significant multi-million dollar School operations budget variances” are in keeping with the school’s mission.

The Heist dispute is spilling into public view after what had appeared to be a period of reform and relative calm for the charity. In a letter late last year announcing that he would step down as board chair, Heist cited the board’s improved relationship with “our regulators,” saying they were working closely with officials “so they have a better understanding of our activities and are not caught off-guard by future announcements.”

The school has until May 3 to file a response to Heist’s complaint. A hearing on the case is set for later this summer.