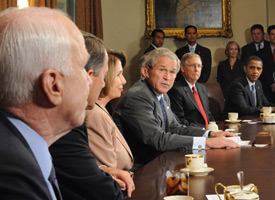 In response to a much-criticizedplan introduced by the Treasury, Congress and administration officials have been hammering out emergency legislation to stave off financial catastrophe.

Bloomberg explored the role credit-ratingagencies played in the credit crisis, and the SEC announced its investigation into credit-default swaps ($), unregulated derivatives that helped fuel Wall Street's meltdown. (Lawmakers are now expressing regret for those years of financial deregulation, by the way.) These swaps were popular with hedge funds, which, despite an SEC probe of their potential market manipulation ($), may emerge as the ultimate victors.

The FBI is investigating Fannie Mae, Freddie Mac, AIG and Lehman. And the SEC is fielding questions about its magically expanding list of companies protected from short-selling.

Lehman has also come under fire for a last-minute $8 billion transfer from its London office to its New York headquarters.

This morning, Speaker Nancy Pelosi said that lawmakers would likely come to an agreement on bailout legislation within 24 hours, but don't exhale just yet. Some say the bailout could actually make the crisis worse, while others say it was never really needed in the first place.

The trial of Sen. Ted Stevens (R-AK), who's accused of failing to disclose gifts and services he received from Alaskan oil-field company VECO, is finally underway. The prosecution opened yesterday by telling jurors that Stevens used VECO as his "own personal handyman service" and never paid a dime for the renovation of his house. Jurors may later hear a taped conversation in which the man overseeing the renovation tells ex-VECO CEO Bill Allen, "Ted gets hysterical when he has to spend his own money."

Stevens' lawyers countered by blaming Allen for hiding costs from Stevens and saying that Stevens' wife handled all the household bills. They also said in a court filing that Allen stands to gain $40 million in ‘hold back' cash from the sale of VECO in exchange for his cooperation.

The battle over the Troopergate probe, investigating claims that Alaska Gov. Sarah Palin fired the state's top cop for refusing to fire her ex-brother-in-law, heated up this week. Last Friday, a state Senate committee waited around fruitlessly for witnesses that never showed up.

The Alaska attorney general has filed a suit to quash the legislature's subpoenas, but the bipartisan legislative council called his actions "political, not legal."

Palin opened a separate investigation into her actions to be run by Alaska's personnel board, three political appointees. That probe most likely will not conclude before the election.

Meanwhile, a top Alaska GOP lawmaker says she is outraged by the McCain campaign's influence in the investigation.

The Pentagon's legal adviser to the tribunals was stripped of that role this week, after three separate military judges booted him from their trials for failing to remain impartial. Separately, a fourth Gitmo prosecutor resigned, accusing his superiors of suppressing evidence in the case of Mohammed Jawad. He will testify for the defense if granted immunity.

Secretary of State Condoleezza Rice told Senate investigators that top White House officials held meetings in 2002 and 2003 on the CIA's harsh interrogations of detainees, and an Air Force colonel described detainee interrogations in testimony to the Senate committee.

Rep. Rangel (D-NY) paid off those overdue taxes, which means he now may lose his coveted rent-stabilized New York apartments. And the House ethics committee voted to investigate allegations surrounding those apartments, a villa in the Dominican Republic, his fundraising methods for his personal foundation and a neglected Rolls Royce in the congressional parking garage.