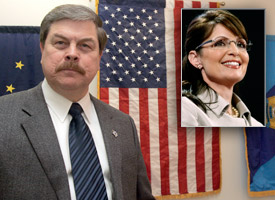 After Alaska Gov. Sarah Palin shot into the spotlight as John McCain's VP pick last week, "Troopergate" - the controversy surrounding the ouster of Alaska Public Safety Commissioner Walter Monegan - made it onto our Scandal Watch. According to Monegan, both Palin and her husband pressured him to fire a state trooper who went through an ugly divorce with Palin's sister in 2005.

In July, Monegan was unexpectedly fired. And an Alaskan legislative panel ordered an investigation soon after. Its findings are now expected to be released in early October.

Meanwhile, investigator says the McCain camp is trying to delay its release, and Palin's private lawyer has already challenged the investigation's authority and questioned witnesses on its own. A former Alaskan attorney general called Palin's legal strategy bogus, but it already prompted a key Palin aide to refuse to testify.

The legal advisor to the Gitmo military tribunals has been barred from yet another trial for appearing to favor the prosecution. Three Gitmo detainees were released to their home countries this week as well.

And finally, in response to an ACLU lawsuit, a federal judge ruled that the government must produce its memos on abusive CIA interrogation methods or explain why it cannot.

Lawyers for Sen. Ted Stevens have been bombarding the judge in his upcoming trial with requests. After announcing on Tuesday that the FBI had taped more than 100 of his phone calls, they asked the judge to bar those conversations from his upcoming trial. They also want the opportunity to tell jurors about the criminal convictions of two witnesses for the prosecution. And they continue to press for the case's dismissal on the grounds that it violates the Constitution ($).

Georgia's Integrity Bancshares kicked the bucket this week. It's the tenth bank to fail this year, and more are sure to follow. Last week, The FDIC announced that its list of "problem" banks has climbed to 117 - up 30% in just this quarter. Historically, one in eight problem banks have failed.

And the Washington Post followed up on its housing bubble series with the big news that it's still burst.

And finally, Detroit's so-called text message scandal resolved itself yesterday with Mayor Kwame Kilpatrick's guilty plea. He'll step down as mayor, serve four months in jail and pay up to $1 million in restitution. But you may see him at the polls again: once his five-year probation is up, he's free to run for office again.