The Senate passed, and the president then signed, a housing bill that will offer relief to struggling homeowners and pump money into mortgage giants Freddie Mac and Fannie Mae if they need it. But before its passage, critics had already sounded off.

In not much of a surprise, the New York Timesreported that IndyMac bank failed because it used lax lending standards that included making loans based on the assumption that housing prices would continue to rise.

On the lawsuit front, California state officials added allegations to a previously filed action that Countrywide rewarded staff for selling risky loans. Connecticut also took on the top credit rating agencies with a suit, accusing them of low-balling municipalities' bond ratings in order to get them to buy more bond insurance. 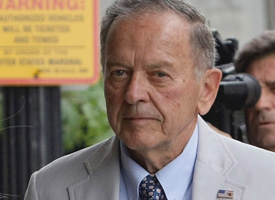 In light of Sen. Ted Stevens' indictment, Alaska got its own scandal this week. It explores the political corruption scandal involving VECO Corp, an Alaskan oil services company that bribed Alaskan politicians for contracts and favors. The Justice Department has been investigating the case since 2004, it said on Tuesday. Since then, threestatelegislators have landed in jail, twomore have been indicted, and others -- including Rep. Don Young (R-AK) and Stevens' son, ex-State Senate President Ben Stevens -- may still be under investigation.

Ted Stevens, who was charged with lying on his financial disclosure forms about gifts he received from VECO Corp, has pleaded not guilty. According to the indictment (PDF), Stevens remodeled his home at VECO's expense.

Although the indictment is unclear on exactly what VECO execs received in return for those financial perks, the Los Angeles Timesreported on Wednesday that Stevens helped pressure Pakistan in 1999 over a disputed deal the country had with VECO.

After the indictment, the Senate Ethics Committee, which had earned the wrath of political watchdogs for refusing to investigate Stevens - despite having FBI tapes of his phone conversations with VECO execs -- released a statement (PDF) that its policy was to defer matters under criminal investigation "so as not to interfere in that process."

While DoJ officials have previously been criticized for their firing of district attorneys, this week, DoJ Inspector General Glenn Fine released two reports on the illegal hiringpracticesat the DoJ. One report concludes that DoJ officials - namely Monica Goodling and Kyle Sampson, formerly an aide to ex-AG Alberto Gonzales - broke the law by hiring conservative or Republican candidates for entry-level positions instead of more highly-qualified candidates that appeared to be liberal. The other report detailed how DoJ officials - again focusing on Goodling and Sampson - broke the law by letting politics influence the hiring of prosecutors and judges. The Los Angeles Timesreported that personnel decisions were also made on the basis of perceived sexual bias.

The judges hired for their conservative political leanings - mostly immigration judges - will not be dismissed, raising concern from immigration advocacy groups.  The Washington Independent reports that the highly-politicized hiring process resulted in a decrease in the number of sitting immigration judges, which poses a problem as immigration cases soar.

The IG interviewed 85 people in order to compile his reports, but received criticism for interviewing only one person from the White House - Karl Rove's aide Scott Jennings.

Karl Rove is getting heat meanwhile, as the House Judiciary Committee voted on Wednesday to hold him in contempt for refusing to respond to a subpoena seeking testimony on his involvement with the controversial prosecution of former Alabama Governor Don Siegelman.

And the EPA was in the spotlight again this week for ordering its pollution enforcement officials to avoid speaking to the press, congressional investigators or the EPA inspector general.

Democrats have called for a probe into EPA Administrator Stephen Johnson's 2007 testimony about White House meddling in California emissions regulation and Sen. Sheldon Whitehouse counted the ways that Johnson has failed at his job.

The trial of Salim Hamdan, a Gitmo detainee and Osama bin Laden's former driver, has been covered heavily this week. The New York Timesreported that the trial - Gitmo's first - is testing the system of military tribunals, made more complicated by a veil of secrecy and constant allusions to a harsh interrogation system. The Times reports that a psychiatrist who had interviewed Hamdan at Gitmo testified that Hamdan thought the trial might be just another interrogation tactic meant to break his will.

Yesterday, a psychologist from the Army Survival, Evasion, Resistance, and Escape (SERE) program testified at the trial, but the press was barred from listening to it.

Defense lawyers brought an expert on jihad warriors to the stand where he testified that Hamdan did not fit the profile of a terrorist; terrorists, he said, are "multilingual, adept at infiltration, very, very talented operatives."

Hamdan's lawyers said they submitted a document proving that Hamdan was sexually humiliated by a female interrogator, which the lawyers define as coercion.

Last week, the judge barred the use of testimony from interrogations that took place at Bagram Air Base in Afghanistan in 2002 because it was obtained under "highly coercive environments and conditions." This week, the judge penalized the prosecution for failing to give documents to the defense. The defense team rested its case today.

Meanwhile, an ex-U.S. official told Time that the U.S. used a British Territory - the island of Diego Garcia - to interrogate detainees. CIA director Michael Hayden admitted this past February that the agency's earlier claims that no rendition had occurred on British soil since 9/11 were incorrect. But he only admitted that two rendition flights had refueled there. Interrogating detainees there would violate U.K. law, Richard Clarke, who served as President Bush's Special Adviser, told Time.

Last month, the Pentagon, after admitting its process of awarding a $35 billion aircraft tanker contract to Northrop-EADS was flawed, reopened bidding to Boeing. This week, the House Defense Appropriations subcommittee delivered another boon to Boeing: it introduced language into a defense spending bill ordering the Pentagon to seek tankers with specifications remarkably similar to Boeing's model.

On Wednesday, the House Oversight and Government Reform Committee held a hearing on KBR's faulty electrical wiring in Iraq, blamed for the death of 16 people. Two weeks ago, the Senate Democratic Policy Committee also heard testimony about the wiring during which witnesses blamed KBR's shoddy work and "good-old-boy network." But this week KBR denied any culpability in the electrocutions. The Pentagon has been berated for its belated investigation into the matter.

Meanwhile, Blackwater came under fire this week after the GAO released a Small Business Administration report (PDF) saying Blackwater may have misrepresented its size to improperly obtain small business contracts from the government.

The Special Inspector General for Iraq Reconstruction released a report (PDF) saying that a California company, Parsons, received a $333 million contract to build prisons, fire stations and court houses in Iraq, but only completed about a third of the projects.

Meanwhile, Colt's monopoly over the military's M-4 rifle contracts was called into question by several rival firms and two senators. Colt's version of the gun has had previous malfunctioning problems, which has elicited numerous complaints.

And finally, Wired's Sharon Weinberger reported that the Army made a deal with a blacklisted Russian arms company.