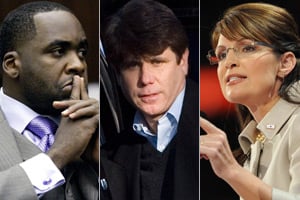 Last week, we highlighted some less-than-upstanding behavior from U.S. congressmen this year. Today we're putting governors and mayors in the hot seat:

When arrested on federal corruption charges on Dec. 9, Blagojevich achieved the nearly impossible: He snatched the "most publicized governor" mantle from Sarah Palin. With his arrest came a colorful criminal complaint (PDF) that reads like a third-rate mob story. In it, U.S. Attorney Patrick Fitzgerald accuses Blago of essentially operating a black market for political appointments: Offer Blago something tempting, and you might find yourself in Barack Obama's old U.S. Senate seat. The Service Employees International Union, U.S. Rep. Jesse Jackson (D-IL) and Obama's chief of staff and attorney general pick have all found themselves caught up in Blago's mess. (None have been accused of any wrongdoing.)

But the real star of the scandal is Blago himself, especially when he offers up such memorable lines as: "Fire all those fucking people, get 'em the fuck out of there and get us some editorial support" (on Chicago Tribune staffers) and "I've got this thing and it's fucking golden, and, uh, uh, I'm just not giving it up for fuckin' nothing" (on Obama's Senate seat).

Don't worry, we've got plenty more Blago coming our way: His impeachment proceedings have hit some snags and the government's case may not be the slam-dunk it first seemed.

Not to be outdone by Blago, Kilpatrick gave us a few great lines -- or text messages, rather -- himself: "Never busted. Busted is what you see!" Well, busted he was. He traded in the mayor's mansion for a jail cell in October after facing charges of perjury, obstruction of justice and misconduct in office. (Assault was thrown in there later.)

In 2003, a high-level cop brought a whistleblower case against the city, saying he'd been fired for looking into allegations of misconduct (read: booze and strippers) by the mayor's security team. The trial uncovered some lurid text messages between the mayor and the aide who fired the cop.

As part of the settlement, the text messages were kept under wraps, but some enterprising reporters at the Detroit Free Press got their hands on them. It appeared Kilpatrick had perjured himself during the trial when he denied having a relationship with the aide. The mayor's dramatic trial (he might be the only mayor in the U.S. forced to wear a GPS tether and spend a night in jail) ended in September when he entered into a plea deal. He's now serving the four months to which he agreed as part of that deal. But he's only prohibited from running for office for five years, so start printing your "Kilpatrick 2014" bumper stickers now.

Sarah Palin earned the distinction of becoming the fastest-rising Google search this year. Amid all that Palin-mania, you may have forgotten that she was also under investigation for allegedly pressuring the state's top cop to fire her ex-brother-in-law.

Make that two investigations. The first was commissioned by the Alaska legislature in July, but after some crackerjack help from the McCain camp, her pledges of cooperation evaporated and she demanded a separate investigation -- conducted by a three-person state board of governor appointees.

The first investigation concluded that Palin was within her rights to fire the cop but had indeed abused her power by pressuring him to fire her sister's ex-husband. At the time, Palin used her talent for rhetoric to claim the report vindicated her.

The second investigation, run by the state board, actually did vindicate her -- and was conveniently released the day before the presidential election.

Meanwhile, Palin's earlier pledges of transparency seemed to have disappeared along with those campaign duds. During the campaign, Palin's lawyer said she wanted the transcript of her Troopergate testimony to be made public (what a maverick!), but earlier this month she decided to keep it under wraps.

Blago, Kilpatrick and Palin may have been the most entertaining targets of investigations this year, but they certainly weren't the only ones. Let's not forget about Baltimore's mayor (under investigation), Birmingham's mayor (arrested), and of course, New York's ex-gov, Eliot Spitzer (humiliated).