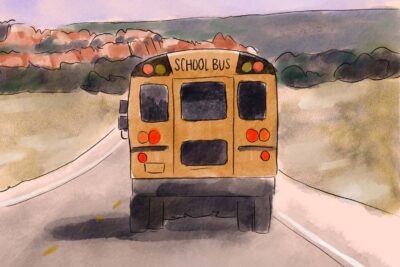 This article was produced for ProPublica’s Local Reporting Network in partnership with New Mexico In Depth. Sign up for Dispatches to get stories like this one as soon as they are published.

Over the four academic years ending in spring 2020, Gallup-McKinley County Schools reported to New Mexico officials that it had expelled students at least 211 times, far more often than school districts in the rest of the state.

Are you part of the Gallup-McKinley County Schools community? We’d like to hear from you.

Yet on Jan. 9, the district’s superintendent told school board members it had expelled just over a dozen students over the past seven years. He called a New Mexico In Depth and ProPublica analysis spotlighting the district’s high expulsion rates, published in December, “completely false.”

“Being expelled from school is very, very rare in Gallup-McKinley County Schools,” Superintendent Mike Hyatt told the five elected board members. “Only 15 students have actually been expelled from GMCS in the last seven years.” Those expulsions stemmed from serious infractions including possession of drugs, firearms and a knife, physical and sexual attacks, and a stabbing, he said.

The district, which enrolls about a quarter of New Mexico’s Native students, was responsible for at least three-quarters of Native expulsions statewide during the four-year period, according to the analysis.

Hyatt’s figure was also much lower than what the district reported to the U.S. Department of Education’s Office for Civil Rights in recent years.

He didn’t explain how he arrived at the figure he cited or the racial or ethnic breakdown of the students involved. Nor did he respond to requests for comment or disclose written materials from his report to the board, which the news organizations requested.

School board members did not ask Hyatt any questions. They unanimously voted to approve his report as a show of their support.

Statewide, Native American students were expelled over the four-year period far more often than any other group and at least four times as often as white students. Gallup-McKinley was responsible for most of that disparity, according to the news outlets’ analysis. The district’s annual expulsion rate was 4.6 per 1,000 students — at least 10 times as high as the rest of the state.

About three-quarters of Gallup-McKinley’s roughly 12,000 students are Native American, most of them Navajo. It has the largest Native enrollment of any public school district in the United States, according to federal figures.

In his comments to the board, Hyatt distanced himself from disciplinary decisions, noting that the vast majority are handled by teachers and principals. “They’re falsely attacking our staff, our teachers, our administration,” he said of the news organizations. “They’re saying that they are making racial decisions when they implement discipline.”

Hyatt told the board that the district has “cut in half” its discipline referrals. He did not respond to the news outlets’ questions about what time period that was based on or the types of student discipline it included.

His claim that the district had expelled just 15 students in seven years could stem from a new definition of expulsion recently adopted by the district. Student behavior handbooks reviewed for recent academic years, including 2021-22, defined expulsion as the removal of a student from school for 90 days or longer.

The handbook for the current school year defines expulsion as a “permanent” removal. However, that change would not affect the number of expulsions the district reported in prior years.

The news outlets asked Hyatt in an email if the district had retroactively used the new definition to arrive at the lower figure. He did not respond.

School districts are free to develop their own discipline policies. But they all report infractions and punishments to the state via a centralized system. The state uses that data to track racial disparities among special education students, as required by federal law.

Most of the expulsions Gallup-McKinley reported to the state for the four years analyzed by the news outlets listed a duration of 90 days. More than 50 expulsions were longer than 90 days, including roughly two dozen with a duration of 365 days.

At the school board meeting, Hyatt suggested that discipline data reported to the state can be slipshod but said he “wouldn’t go into” the details other than to say errors sometimes happen. “As far as data, there’s no set, hard-and-fast way you have to submit something,” he said.

That’s not entirely true. The state Public Education Department provides a user’s manual that details what districts must report and how to do so. Asked about that, Hyatt did not reply.

He acknowledged at the board meeting that he had refused to speak with the news organizations about student discipline, though he also complained that he was not given a chance to respond before the story was published in the Gallup Independent.

New Mexico In Depth and ProPublica repeatedly sought interviews with Hyatt over most of the last year. He was copied on nearly 100 emails between the news organizations and his staff. More than a month before the story was published, he was provided with a detailed list of findings and invited to respond or correct any inaccuracies. He sought no corrections from the news organizations before or after the story’s publication.

Students in Gallup-McKinley schools faced 735 disciplinary incidents involving law enforcement, according to the news organizations’ analysis. That amounts to a rate nearly four times as high as the rest of the state.

Hyatt said that was “outlandish.” He claimed the story “tries to paint the picture” that “we call the police all the time and have students arrested.”

He said schools involve the police only when there are “life and safety issues,” when officials need to turn over illegal drugs seized from students “or if there’s other types of things that we notice where there may be something else the police need to be notified about.”

The district’s reports to the state included cases in which law enforcement, including juvenile probation officers, were called for infractions such as disorderly conduct and tobacco use.

Law enforcement was involved in 193 incidents involving Native students accused of disorderly conduct from 2016-17 to 2019-20. About 9 in 10 of those incidents occurred at Gallup-McKinley schools, records show.

Hyatt also claimed that the disciplinary experience of a seventh grade student profiled in the article wasn’t accurately reported. The news organizations obtained the child’s records with permission of his grandmother to verify his account.

The child is now repeating seventh grade after missing too many days last year.