Investigative reporting exposes the failings of institutions – government agencies and legislatures, schools and universities, businesses, unions and others-- which betray the public trust or take advantage of the less fortunate. At their heart, the best investigative stories show how individuals and families are harmed by the decisions of these institutions.

On June 10, ProPublica marks its fifth birthday; we wanted to do so with a look at how some of the people we reported on in our major investigations have fared in the months and years since the stories appeared. 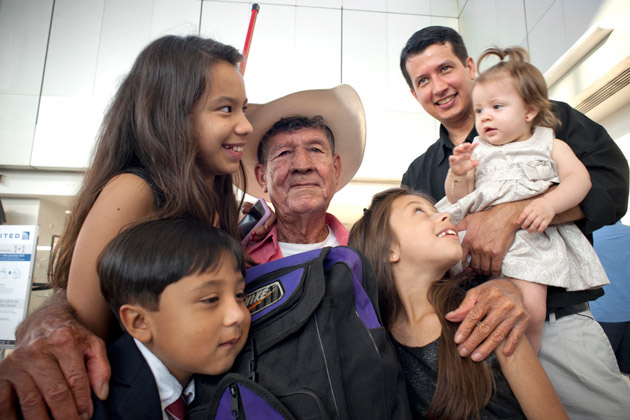 Tranquilino Castañeda is surrounded by his son, Oscar, top right, and grandchildren after arriving from Guatemala at Newark Liberty International Airport on May 28, 2012. (Torsten Kjellstrand for ProPublica)

Oscar Ramírez Castañeda was 3 years old when Guatemalan commandos raided his village, massacring more than 250 men, women and children. Oscar survived the attack on Dos Erres — but only because a commando abducted him along with another boy.

Raised by the lieutenant's family, it took Oscar nearly 30 years to discover the truth about the massacre, his survival and his real identity.

In 2011, Guatemalan authorities arrested and convicted five suspects in the Dos Erres case, and U.S. investigators have tracked down four suspects in the United States. But at least seven others accused in the attacks are alive and remain at large.

Much has happened since we first reported Oscar's story in May 2012. Soon after, Oscar reunited with his real father, who had been away from his village on the day of the massacre and believed all nine of his children and pregnant wife had been killed.

U.S. immigration officials granted Oscar political asylum – because as living evidence of the Dos Erres massacre, he faced potential retaliation. That enabled Oscar, who had been living in the country without legal status, to get his driver's license and a bank account.

He appeared at public events in New York and Washington, D.C., to tell his story. "I enjoyed it," he said earlier this year. "A lot of people are out there fighting for human rights, so I like being able to make a contribution, too."

Oscar lives in Framingham, Mass., with his wife and four children. He works two jobs and said he hopes to study a trade and improve his situation.

“In the future, I would like to have my own restaurant one day,” said Ramírez. “With Latin food.”

Read the story:Finding Oscar, by Sebastian Rotella, May 2012

We reported the story of Jim Butler and his quest to find out what happened to his son, Sgt. Jacob Butler, last November as part of our investigation into the military’s failure to preserve field records for dozens of units. The senior Butler has spent nine years fighting to obtain his son’s original casualty report, a document he may never receive.

Butler has since written his own account of his ordeal: “Beyond Honor, A Promise Kept,” was published this year by Tate Publishing. Like Butler, the book is unassuming, a simple account of his promise to stand where his son fell in fighting in Iraq and his quest for missing military records that would tell him that story.

“Jake’s incident in my eyes is just like a little Benghazi,” says Butler, as he signed books at a garage sale in Wellsville, Kan. “Some of it was just was swept under the table.”

To this day the U.S. Army has never provided Butler with a detailed account of how his son died. Rather, he pieced that together on his own, and with the assistance of ProPublica. Today he finds himself at book signings and radio interviews, a far cry from his usual work as a jack-of-all-trades in rural Kansas.

He refuses to stand down and let his son’s story fade away, despite occasional urgings from friends and family. The book helps keep him going, he said. “It’s keeping me occupied,” he said. “I don’t know if I’m going to make any money on it.”

Butler still drives his son’s pickup truck, with more than 300,000 miles on it, and keeps a picture of Jake in the back window.

Read the story:A Son Lost in Iraq, But Where is the Casualty Report? by Peter Sleeth, November 2012 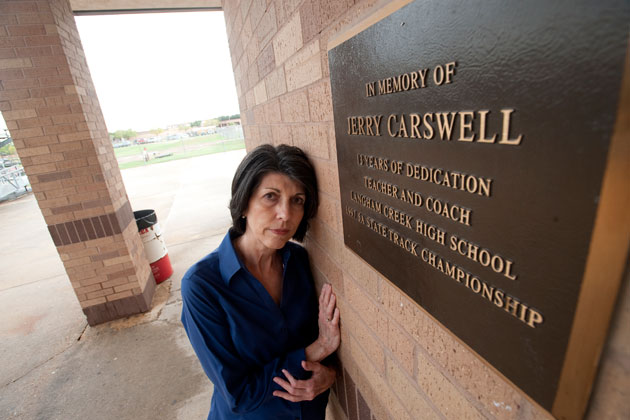 Linda Carswell poses at the Langham High School track by a memorial plaque for her husband. Her lobbying and testimony played a crucial role in the Jerry Carswell Memorial Act, a new informed consent for autopsies bill passed in Texas this year. (Sharon Steinmann/ProPublica)

Linda Carswell’s husband Jerry had been to Christus St. Catherine Hospital in Katy, Texas, with kidney stones. When he died unexpectedly, Linda embarked on a seven-year battle to determine the cause of her husband’s death.

We first reported Linda’s story in December 2011 as part of our investigation into flaws in the U.S. system of death investigation. Her family’s case would play out in pathology labs, lawyers’ offices and courtrooms as the Carswell’s pressed for accountability over Jerry’s death and subsequent incomplete autopsy.

The case led to a $2 million fraud judgment against Christus St. Catherine, which was found by a jury to have deceived Linda about the autopsy. It also led to state legislation designed to strengthen family entitlement to comprehensive, independent post-mortem reviews. But after all this time, the Carswell family has still been unable to properly lay Jerry to rest: His heart is locked away in a morgue, and the hospital refuses to release it.

She continues to fight for her husband’s heart, and is awaiting the ruling of an appellate court. Said Carswell: “They don't understand the human meaning of this at all.”

Read the story:Why Can’t Linda Carswell Get Her Husband’s Heart Back? by Marshall Allen, December 2011 ProPublica began reporting on the aftermath of Hurricane Katrina in 2008 and those stories – done in collaboration with partners including The Nation, the Times-Picayune, and PBS “Frontline” — are still continuing to develop.

Let’s start with the shooting of Donnell Herrington and other African Americans in the Algiers Point neighborhood of New Orleans. After an extensive probe, federal prosecutors in 2010 charged Roland Bourgeois Jr., who is white, with federal hate crimes for attacking Herrington and two others. Since then a judge has postponed the legal proceedings a dozen times, repeatedly finding Bourgeois mentally unfit for trial. The trial is now scheduled for August 2013, though that date may well change again.

Herrington, who has aspirations of working as an actor, has made cameo appearances in the HBO drama “Treme.”

Our reporting on the New Orleans Police Department helped lead to the federal prosecution of seven current or former cops on felony charges. The prosecutions set the stage for a massive overhaul of the chronically troubled police force, including the resignation of the deputy superintendent — the second-highest ranking officer in the department — and the ouster of numerous other cops.

One of our first stories examined the death of Henry Glover, a New Orleans resident whose burnt remains were left in car on the banks of the Mississippi River. That report linked Glover’s slaying to the police department and raised questions about whether the department was covering it up.

In 2010, a jury found David Warren, Greg McRae and Travis McCabe guilty on charges tied to Glover’s killing. Warren, who’d left the force before the trial, was convicted of a civil rights violation and manslaughter for shooting Glover with an assault rifle. Officer McRae was convicted on four charges for burning Glover’s body. Lieutenant McCabe was convicted of creating a bogus police report and misleading federal investigators. The jury acquitted two others: an NOPD lieutenant and an ex-lieutenant.

Judge Lance Africk sentenced Warren to 25 years in prison, while McRae got a 17-year sentence. But the judge quickly overturned McCabe’s conviction – before he could even be sentenced – when new evidence surfaced.

An appellate court then found in Warren and McRae’s favor, ruling that Warren’s trial should have been severed from that of the other defendants, and concluding there was “insufficient evidence to convict” McRae on another related charge.

Now all three men are facing new trials. McCabe is trying to get reinstated as a police officer while awaiting his re-trial.

Another report in our series looked at the death of Danny Brumfield Sr., who was shot by a police officer in front of the city’s convention center after the levees failed. That story helped spur the prosecution of officers Ronald Mitchell and Ray Jones on perjury and obstruction of justice charges related to Brumfield’s shooting.

Please be patient after pressing the gift button; pressing it more than once can result in multiple submissions.

Pro Publica, Inc. is a non-profit corporation, and is exempt from taxation under Section 501(c)(3) of the U.S. tax code. Contributions by U.S. taxpayers are deductible to the extent permitted by law. All contributions will be gratefully acknowledged.