Salmon People: A Native Fishing Family’s Fight to Preserve a Way of Life

This documentary film features the plight of the salmon of the Columbia River and the Native people whose lives revolve around them. 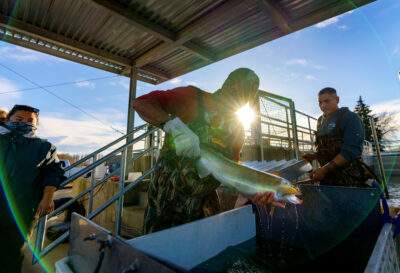 Salmon Disappear From the Pacific Northwest

This video was produced for ProPublica’s Local Reporting Network in partnership with Oregon Public Broadcasting. Sign up for Dispatches to get stories like this one as soon as they are published.

When the salmon are running up the Columbia River, Native people are there with them. They live, eat and sleep at the river. Their children grow up at the river. They catch salmon for subsistence, for ceremonies and for their living.

This is the life of the Wy-Kan-Ush-Pum, the Salmon People. It is a life Columbia River tribal people have lived for generations and have fought for decades to protect. Over the last century and a half, they have watched as forces eroded their access to salmon. Treaties removed them from their traditional fishing areas; dams massively reduced the numbers of salmon that swam in the waters; environmental contamination further poisoned the well.

And now, as climate change threatens the salmon throughout its life, the stakes of that fight are existential.

Watch the documentary, and read all of ProPublica and Oregon Public Broadcasting’s team reporting on the threats facing salmon and the broken treaties that the government swore would protect tribes’ right to fish.