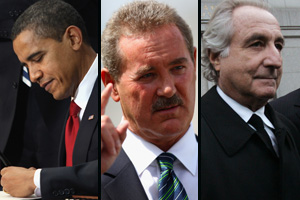 Executive pay limits for bailed-out banks finally made the leap from talking point to law when President Obama signed the stimulus bill on Tuesday. Congress' provision is stricter than what the Obama administration had proposed, but bankers needn't start pinching pennies yet: Obama officials expressed concern about the stringent limits on Sunday, and they still have some wiggle-room to decide how to implement them. Meanwhile, many Morgan Stanley and Citigroup brokers are definitely not pinching pennies after raking in a total of about $3 billion in "retention fees" to induce them to stay on at the two banks' new joint venture.

But apparently it pays to leave Citigroup too: Bloomberg News reports that Citi pays for offices, secretaries and car service for some former execs, and it's not the only bank to do so. Managers of mutual funds aren't doing too poorly either: Many earned big bonuses last year even as their funds plunged.

Robert Allen Stanford probably doesnât like his new moniker, "Mini-Madoff," as much as he liked being called "Sir Allen," but that's what happens when the SEC accuses you of operating "a fraud of shocking magnitude that has spread its tentacles throughout the world."

The SEC accused Stanfordâs company of peddling $8 billion in certificates of deposit to investors -- promising what the SEC calls "improbable, if not impossible" returns -- while actually putting their money in "illiquid investments, such as real estate and private equity." It also lied to clients about who was auditing the company and its exposure to losses stemming from the fraud of the real Bernard Madoff, says the SEC.

Stanford went missing after the charges were announced, but the FBI caught up with him yesterday in Virginia. It marked the end of a lucky streak for Stanford, who had managed to evade federal authorities for years. The FBI investigated "suspected money laundering at Stanford's offshore banks but could not come up with evidence to charge him" in the 1990s, reports the Washington Post. And the SEC found "significant securities violations" at the company in previous years but failed to prevent the fraud.

Now many lawmakers in Washington are trying to distance themselves from a web of Stanford ties. Even President Obama gave away a donation from Stanford.

The Wall Street Journal reports that the trustee managing the liquidation of Madoff's company recently subpoenaed a slew of "law firms, accountants and other businesses." Even Blow Styling Salon, a hair salon near Madoff's apartment, got one. The trustee said today that it looked like Madoff's firm hadn't bought any securities on behalf of customers for at least 13 years.

Maine Will Soon Hire Its First Five Public Defenders. Most of the State Remains Without Them.

Building the “Big Lie”: Inside the Creation of Trump’s Stolen Election Myth

What We Lose When We Conflate Child “Abuse” and “Neglect”