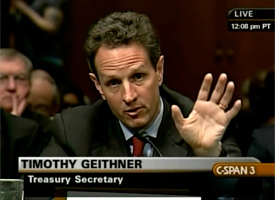 You might catch a glimpse of a toupee-sporting bailout driving a flashy red Porsche, because it is definitely having a midlife crisis. Treasury Secretary Tim Geithner introduced a new plan for the second half of the TARP funds, but it was widely criticized for its lack of clarity and similarity to his predecessor's much-maligned bailout strategy. According to the New York Times, Geithner blocked some restrictions, like tougher limits on exec pay, for banks taking the government's money, over the objections of some of President Obama's top advisers. The Treasury is counting on private investors to buy some of the toxic assets floating around Wall Street, but prospective buyers remain wary.

Meanwhile, the Los Angeles Times reports that the bailout's inspector general is investigating reports that members of Congress tried to steer bailout funds to certain banks. The Washington Post determined this week that well-connected banks can easily finagle a meeting with senior U.S. financial officials.

Finally, a former Bank of America employee tells TPMMuckraker that the bank has attempted to trick customers into paying fees they don't owe. Case in point: A man whose mother had just died says he called to inform the bank and was asked how he planned to "take care of her balance." When he told the representative he had no legal obligation to pay, she reportedly responded, "Oh, that's really not the way to look at it. I know that if it were my mother, I'd pay it."

There were two big developments in the Madoff scandal this week. First, Bernard Madoff signed a partial agreement with the SEC in which he agreed not to "contest the agency's civil fraud allegations." He did not, however, admit or deny any of those allegations. The New York Times says the deal "could eventually force him to pay a civil fine and return money raised from investors." Secondly, a recently filed Massachusetts regulatory complaint reveals that Madoff's wife withdrew $10 million from a brokerage firm co-owned by her husband the day before his arrest. It was her second withdrawal in three weeks, sparking speculation about what she knew and when she knew it.

The day the Justice Department reported that Attorney General Eric Holder had ordered a review of "all claims of state secrets," which the AP notes "were used under President Bush to shield controversial anti-terrorism programs from lawsuits," it also exercised the state secret rule itself. The Justice Department told a California court that if a case brought by men who say the CIA abducted and rendered them to countries in which they were tortured proceeds, national security would be put at risk.

Meanwhile, we reported that a "trove of secret memos describing the Bush administration's views on interrogation and detention of terror suspects" may be aired soon because the government's case for keeping them secret doesn't quite hold water in light of a Jan. 22 executive order.