A ProPublica investigation revealed how PACE loans hurt homeowners. Ygrene, one top Missouri lender, said reforms made after our investigation were a factor in its decision to stop making loans in the state.

The self-dubbed Mama Bears filed a federal lawsuit alleging that by not being allowed to read sexually explicit material aloud at school board meetings, they themselves are being censored.

Weston Brown thought he had fully come to terms with his mother's anti-LGBTQ beliefs. Then he saw the video of her speaking at a school board meeting. “I couldn’t stay quiet about that.”

A first-of-its-kind analysis reveals that, on average, Army soldiers had to face at least eight counts of sexual offenses before their commanders jailed them ahead of trial as often as soldiers charged with drug or burglary crimes.

A Massachusetts mayor wanted to look outside for a chief to clean up a “toxic” police department. But a city ordinance forced him to promote from within.

Baltimore County police have started testing a backlog of evidence from rape cold cases. Ten of 49 cases processed so far have yielded actionable DNA profiles. In at least one case, the answers came too late.

A first-of-its-kind analysis reveals that soldiers in the Army are more likely to be locked up ahead of trial for drug offenses than for sexual assault under a system that gives commanders control.

Soldiers are more likely to be held before trial for drug charges than for sexual assault, an analysis of court records shows. Here’s how reporters from ProPublica and The Texas Tribune figured it out. 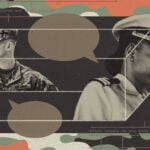 We’re looking into how the military investigates service members accused of crimes, intersects with the civilian justice system and treats cases that do not make it to courts-martial. Guide us to important stories.

Time and again, mining company Homestake and government agencies promised to clean up waste from decades of uranium processing. It didn’t happen. Now they’re trying a new tactic: buying out homeowners to avoid finishing the job.

Radon, a byproduct of naturally decaying uranium, is estimated to cause thousands of deaths in the United States every year. Here’s how to find out how much radon may be in your home and what you can do.

Across the country, companies have been handing off uranium mills and disposal sites to the federal government. ProPublica wants to understand the process from all sides.

by Maya Miller and Mark Olalde

To accommodate the West Virginia senator, Democratic leadership agreed to legislation streamlining permits for the often-stalled Mountain Valley Pipeline and removing jurisdiction from a court that keeps ruling against the project.

We’re organizing and hosting a breakfast at ONA22 that pairs mentees with mentors based on their backgrounds, challenges and interests in journalism.

Following reporting by ProPublica and The Texas Tribune and attention from the EPA inspector general, the agency announced plans to "inform and engage" communities about elevated cancer risk from ethylene oxide. It should have done so years ago.

by Kiah Collier and Maya Miller